Lucia Fabrizio’s sensational goal with 15 minutes to go in the game propelled St. Cloud to a 1-0 win over Tohopekaliga in a Class 6A, District 9 playoff semifinal on Wednesday night.

The win propelled the Bulldogs to a championship game against New Smyrna Beach (8-5-3), a 4-1 winner over East River in the other semifinal. St. Cloud met New Smyrna during the regular season, taking a 2-0 win back on Dec. 12.

Although St. Cloud dominated possession most of the game and had several excellent scoring opportunities, it still needed a little magic from Fabrizio to pull out the win in regulation. With the game at a scoreless tie, Fabrizio took a ball chest high, flicked it over while spinning around a defender and blasted the ball in one motion into the right corner of the net for a 1-0 lead.

“It happened so fast, it certainly wasn’t planned,” Fabrizio said of his masterpiece. “The ball was played into me and I flipped it over him and spun and ball came down on my foot. I saw the corner of the goal and just let it rip.”

“Maybe the goal of the year,” St. Cloud Head Coach Craig Weylan said. “At least for us it was. Lucia made a great move and slammed it in the upper corner, the goalie had no chance. But he has been doing things like that all season.”

St. Cloud, who went to 13-5-1 with the win, had some solid scoring opportunities earlier in the game, but could not convert. Just four minutes into the game, Ryan Hinton executed a near perfect bicycle kick that was stopped by Tiger goalie Joseph Michael. Later in the half, Hinton fired a sinking shot from distance on a free kick that sailed over Michael’s head but hit the top from the crossbar.

Earlier in the second half, Fabrizio had two shots that were both turned away by Michael – including a long shot from outside the 18-yard box that floated over the goalie’s head but struck the crossbar square and bounced away.

A hard Kevin Prado shot in the second period bounded off the goalie, rolling over his head but was also stopped by the cross bar.

Tohopekaliga, that came into the game with a 4-14-5 record, did not play like a No. 4 seed. The Tigers managed to put four shots on goal in the game, including two by Carlos Jimenez. Taking a pass after a St. Cloud turnover, Jiminez drove in from the right side and looked to have an angle on a shot, but Bulldog goalie Noah Craig came off his line and cutting the angle off and punching the shot away.

“It was a tight game throughout,” Weylan said. “Give Toho a lot of credit, they came to play and left it all on the field tonight. We had some opportunities early and didn’t capitalize, and that’s something we need to work on and be better at. As we advance in the playoffs, the teams we face are only going to get better and better.”

The Storm opened its play in Class 7A, District 6 with a convincing 2-0 win over county rival Osceola, before losing a 3-0 game to Cypress Creek in the district semifinals. The Storm will await word on whether their 11-5-2 record will be enough to earn an at-large bid to the regionals.

The Panthers season ended on Jan. 27 when its lost a 1-1 game to Jones High School in a shootout in the quarterfinals of the Class 5A District 5 playoffs.

Playing in Class 6A District 12, Brett Ballard’s team won its district quarterfinal game with a 4-1 victory over Martin County. The Longhorns would go on to play Viera in the semifinals, losing a 3-0 decision to the 17-1-2 Hawks. Harmony must now wait until Monday to see if they advance to Regionals as an at-large team.

The Chargers (4-10-0) finished their season, dropping an 8-0 decision to East River in the Class 6A, District 9 quarterfinals.

The Kowboys (9-9-2) saw their season end with a 2-0 quarterfinal loss to Celebration in the Class 7A District 6 playoffs.

The Eagles (7-11-0) had their season come to an end to Tohopekaliga in the Class 6A District 9 quarterfinals. • St. Cloud

After receiving a first round bye in the postseason as the top seed, St. Cloud (13-5-1) earned a spot in the Class 6A District 9 championship game with a 1-0 win over Tohopekaliga.

The Eagles (4-15-5) defeated Poinciana, 4-0, in a Class 6A District 9 playoff quarterfinal before being eliminated by St. Cloud, 1-0, in the semifinals. 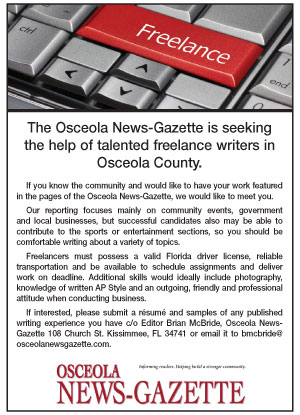