Harmony and Osceola, the two top wrestling teams in the county, dominated the Osceola News Gazette’s 2019-20 AllCounty team claiming 11 of the 14 spots on the team.

The Longhorns, who ended Osceola’s stranglehold on the Orange Belt Conference Championship this year, led all schools with six selections to the All-County team.

Osceola, who claimed two state champions in freshman Cooper Haase (106) and junior Jaekus Hines (132) had five wrestlers on the all-county team. Gateway, St. Cloud, and Poinciana had one selection each, as Panther KyJaun Allen was named to the team at 285-pounds, Eagles senior Zayveon Mitchell grabbed the 126-pound spot and Bulldogs junior Wilfred Martinez earned the ONG’s spot at 160.

“Both those guys had outstanding seasons for us,” Head Coach Jim Bird said about his two state champions. “Cooper was a bit of a surprise in that we knew he was extremely talented but was also young. He matured so much from the start of the season to the state tournament. It’s almost like a light switch flipped on for him in February and the level of improvement from the start of the season to end was phenomenal:’

Hines, who recorded a pair of state runner-up finishes in both his freshman and sophomore years, reached the top of the podium this year with an 11-3 win in the state finals over Columbus sophomore Christian Guzman.

Cooper Haase posted a 55-6 record in his freshman season, capping it off with a state championship with the win over Guzman. In the state tournament, Haase beat South Dade star Adrian Morales, 8-0, in the semifinals - a wrestler that beat him twice in the regular season. Haase was perfect in the postseason, winning an Orange Belt Conference, District and Regional titles before capturing his state championship.

Aiden Poe posted an outstanding sophomore season, recording a 42-5 record. He won both an OBC and District crown before qualifying for the FHSAA Class 2A state championship via a second place finish in regionals. Poe went 1-2 in the state tournament.

After advancing to the state championships and winning his first round match, Zayveon Mitchell from Poinciana earns a spot on the ONG’s All-County team, edging out Osceola’s George Duncan and Harmony’s Dylan Jones. Mitchell, a senior, finishes the season at 37-10. He finished second to Duncan at OBC’s suffering a 2-1 loss. He rebounded to beat Jones in Districts and then qualified for state by finishing third in districts.

After getting pinned in the first round of the state tournament, sophomore JC McNichols wrestled back to earn all-state honors with a fourth place finish at the FHSAA Class 2A State Championships. McNichols was the OBC champion at 132 before dropping down to 126 for the post-season. McNichols would pin all three of his opponents to win the District 5 crown before finishing third in regionals. He concluded his season with a 44-12 record.

Total domination is the best way to describe Osceola junior Jaekus Hines season. After two consecutive runner-up finishes in the state tournament, he put it all together at this year’s championship, recording a technical fall with a 19-3 win over Flager’s Andrew Dance, before pinning his next three opponents, including South Dade’s Adrian Neco in the finals. He won the OBC Championship at 138 and also claimed a district title in finishing the season with a 40-4 mark.

After finishing second to Hines in the OBC Championship, Ewen won a Class 2A District 5 championship before seeing his season come to an end in with a loss in the consolation semifinals in regionals. Ewen recorded a 37-11 record.

Fletcher Small claimed an OBC Championship with a pin over Celebration’s Jeremiah Cerino before moving on to place second at districts. His season would come to an end in a semifinal consolation loss at regionals, as he finished the season with a 38-11 record.

The Orange Belt Conference Champion at 152, Adriel Martinez is the ONG’s AllCounty selection at that weight class. A senior, Martinez would win districts, before earning a spot in the Class 3A State Championship Tournament with a second place finish at regionals. In the state tournament, Martinez would pick up a first round win before finishing his season at 18-14 with a loss in the consolation semifinals.

Wilfredo Martinez edges out Harmony’s Sean Seery as the ONG’s 160-pound wrestler on the all-county team. Martinez lost a 1-0 decision to Seery at OBC’s before moving on to win the Class 3A, District 9 Championship.

He would advance to the regional finals, where he was injured. He earned a spot in the state tournament but could not compete, finishing with a 40-8 record.

The OBC Champion at 170, Will Jacobson went on to earn a state championship bid by finishing second in the district and capturing third place in the regionals in Class 2A.

He won his first match in the state tournament but junior suffered back-to-back losses to finish his season at 43-12.

Nolin Eaddy only lost twice in the post-season, both times to eventual state champion Jesse Martinez. The OBC and District champion, Eaddy lost in the semifinals for Martinez in the Class 3A, Region 2 championship. He won his first three matches at states, before losing in the finals to Martinez, 9-0. The allstate performer finished the season with a 35-3 record.

An OBC and district champion, Juan Gomez advanced to the FHSAA State Championship tournament by placing fourth in the regional meet. Gomez went 1-2 in the state tournament to finish with a 38-10 mark on the season and earn a spot on the ONG’s AllCounty Team.

The Osceola News Gazette’s All-County selection at 220-pounds is Osceola senior Dylan Ruiz, who earned championships in the Orange Belt Conference, District and Regional tournaments. Ruiz won his first match in the state tournament, before losing a heart-breaking 5-4 decision in the second round.

He recorded three consecutive wins to reach the third place match, where he defeated Gerald Greaves in sudden victory. Ruiz finishes his career as an all-state performer in both football and wrestling.

After finishing second to Poinciana’s Quaylen Hill in the OBC Championship, KyJauan Allen advanced by placing third in districts and fourth in regionals to advance to the state championship tournament, where he went 2-2 to finish the season with a 37-18 record. Given his advancement to the state tournament, Allen edges out Hill for a spot on our All-County team. 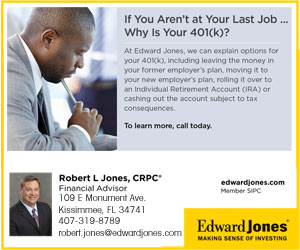