The city of Kissimmee sponsored and hosted its annual Martin Luther King Jr. Unity Celebration on Saturday. After the morning’s parade, adults, children and families made their way to Kissimmee Lakefront Park on Lake Tohopekaliga for the afternoon festival.

The palms swayed gently in the breeze and the sun shone brightly as the crowd gathered near the stage at Kissimmee Lakefront Park to hear some musical memories performed by Mary Wilson, formerly of the famed singing group, The Supremes. Wilson was “accompanied” by an entire audience of back-up singers. As one looked out into the crowd, it was evident that most, if not all, in attendance knew the lyrics to every song she performed as they sang along with her throughout the concert. She was the headlining act of this signature festival series event held in honor of scholar, minister, and civil rights activist, Martin Luther King Jr.

Activities and food were abundant throughout the event. KUA (Kissimmee Utility Authority) did its part to keep the children entertained with its KUA Kids Power Zone, which provided an assortment of giant inflatable slides and bounce houses, as well as a bungee cord jumping experience. Food trucks served up an assortment of international cuisine, as well as local favorites, including Jamaican style chicken, Cuban sandwiches, corn dogs, collard greens, macaroni and cheese and hot boiled peanuts. For dessert, kids (of all ages) enjoyed the snow cones served by KUA employees and their family members.

For those feeling creative, there were arts and crafts activities. With the help of glue, glitter and magic markers, children transformed plain visors into wearable works of art.

People were gathered in groups of varying sizes throughout the lakefront park. Families congregated at picnic tables near the food trucks to share a meal.

Parents played with their children, helping them navigate the park’s playground equipment, while others simply enjoyed a leisurely stroll along the walkway.

Some festivalgoers chose to laze by the water’s edge. They lounged on Adirondack chairs facing the stage, enjoying the music and observing festival activities from a relaxing distance.

This was the city of Kissimmee’s first event of 2020’s festival series and attendees were invited to share their opinions about the festival by filling out questionnaires provided by the city. 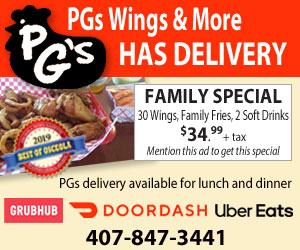