The Osceola County Sheriff’s Office arrested a man who thought he was going to meet a 14-year-old child for unlawful sexual activity.

Jacob Alan Edmonds, 30, was charged with traveling to meet a minor for sex and use of computer to seduce, solicit or lure a child.

On March 12, Sheriff’s Office detectives with the Internet Crimes Against Children unit assisted the Polk County Sheriff’s Office during an operation to locate online predators. During the operation, a suspect later identified as Edmonds began a sexually explicit conversation with someone who he believed to be a 14-year-old child. The online conversation continued sporadically for weeks after the operation ended.

On April 23, the conversation again turned sexual and Edmonds asked to meet the child for unlawful sexual activity. But instead, Edmonds was met by detectives and arrested. He was cooperative with the investigation and later booked into the Osceola County Jail with no bond.

“The Osceola County Sheriff's Office is dedicated to serving our community, protecting our children from and increasing public safety,” said Sheriff’s Office Maj. Jacob Ruiz in a press release. 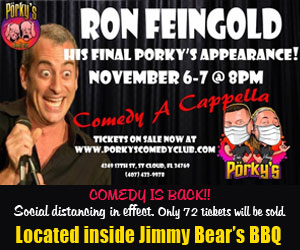